Previously, the only other tower simulator of this kind had been located in Israel. It was also realised by Viscon in cooperation with American software partner UFA, for the Israel Airports Authority. The current project’s contracting entity was the Deutsche Flugsicherung (DFS).

The German military had previously transferred its air navigation services training to the DFS. Now, DFS subsidiary KAT (Kaufbeuren ATM Training) is in charge of training. For this purpose, a modernised training centre was created in the Kaufbeuren Air Base.

Technical details of the tower simulator

At the heart of the simulation centre is the new 360-degree tower simulator, which was also the highlight of the official handover in February 2017. The details:

In the previous system, twice the number of projectors had only managed a significantly lower resolution. Switching from the previously analogue technology to digital technology made it possible, among other things, to reduce the hardware in the racking room to 10% of the former system. 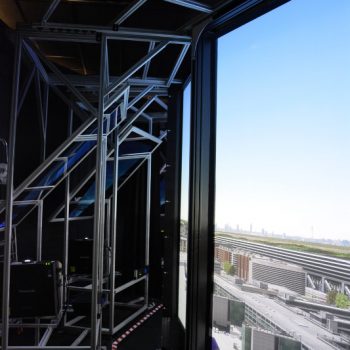 High requirements in terms of simulation software as well

Unlike previously with the German military, trainers and students go over the training sequences once more in the debriefing room after the fact. At this step, it is possible for trainers to intervene in the training task and simulate the effects of modified instructions. Software customisation on Viscon partner UFA’s side was accordingly intricate. In addition, the simulator software was intended to be identical at the two DFS locations Kaufbeuren and Langen. As a result, that meant the following: The new “What if” feature can now be used at both locations, and the overall system can be maintained at one uniform status.

Realisation on schedule within a short time

In January, the responsible parties met for an initial workshop. After four more meetings with training managers, teachers, engineers and German military representatives, a catalogue of requirements was defined at the end of April, and UFA was commissioned with expanding the simulation software. A short five months were granted for software adjustments. Usually, software adjustments as extensive as these usually take three years.

In November, the project team was able to begin dismantling the old systems and to set up the new simulator. As early as the end of the year, the setup was complete. Once again: a very narrow time window.

We would like to thank the experts of the Deutsche Flugsicherung and the engineers involved on site for the smooth cooperation!